Soul experiments. The everyday and transcendence of being

I gave birth to a child of water.

In summer I still did not know. I was in a hurry to let him go on thinking that he was another, another thing, a bit of my being of which I should let go; secretly, a dead flap of flesh which I wanted to cast away from me. Now I want to play with him.

He was born outside. He is my creation.

A repetitive element: A child of ice in everyday or trivial situations. For some time now I am interested in the point of connection or border between the everyday and the transcendent which is inseparably linked to our life. A thoughtful attention to what we are experiencing provides us with esthetically playful or strange perceptions and transcendental reflections within the realm of the trivial, the vulgar or the intranscendental. In my opinion the best of what the art of the twentieth century has brought us is the permission to look and perceive a different way, more freely. To act physically is one of my obsessions in front of the immobility of solitary thought; united they make life dynamic. The actions in these experiments try to link this dichotomy in view of generating active thought. The actions construe themselves like modest situations without pretensions, relaxed, where the participants develop a natural behavior, with fluid movements or interruptions which do not affect the continuum of normality. 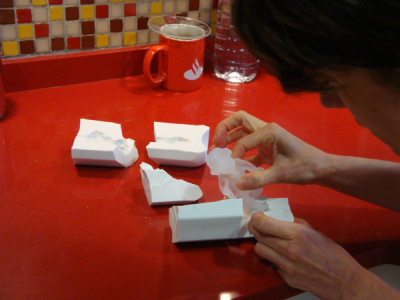 The chosen space where to situate the actions stem from my habits throughout the seasons of the year, they participate in my personal interests, my curiosity, established inertias or making use of casual encounters with others.

To participate in one of these experiments is a present which the others make me; I share with them my need to communicate, common to all social beings, being part of a strategy of survival.

The factors of time and chance are important because there is no cause-effect in these acts which in certain instances seem to be sacrificial rituals; the child disappears just like the elements of nature while the vital act happens. 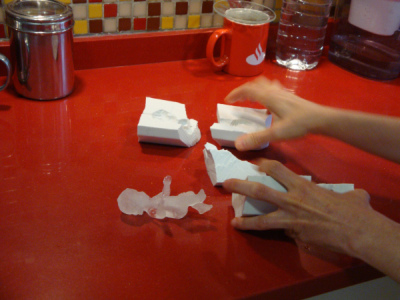 Soul experiments. The everyday and transcendence of being is projects initiated in 2011 due to a need of widening and change in my approach to the customary themes in my work. On one hand, my work in performance always has been conditioned by the opportunity of space and participants which often are not accessible the moment of realizing the project I have in mind; therefore I decided to dispense of the negotiated circumstances and to make use what everyday situations offered and the accessibility of a camera for filming. In this sense, being conscious of the anxiety produced in many artists in working with the latest technology appearing on the market, i.e. a sense of expressive esthetic impotence, made me ask myself if this was not one more trap of the socio-economic system in which we live. Therefore, I decided to film with a domestic camera without HD at my disposition.

The work process I follow is very simple: I produce the figure of the child in the freezer of my home, and then to introduce it I make use of shared moments with friends or, on other occasions, people and places suggest me a programmed encounter, taking advantage of regular activities. The action is filmed just as it occurs and afterwards a video edition is produced, enriched by the lived experience as well as the one provoked by looking at the images in bruto. The result forms part of a narrative visual experiment which hopefully will be complemented by a written part about what is not seen on he screen. 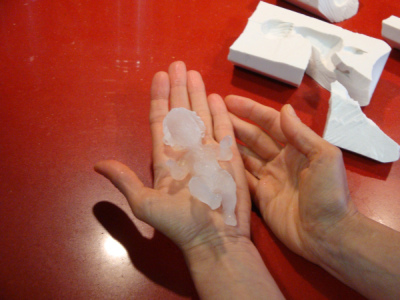